Discover our villas
Home »
The magazine »
Luminous geckos to breaching whales: the wildlife of Mauritius

Luminous geckos to breaching whales: the wildlife of Mauritius 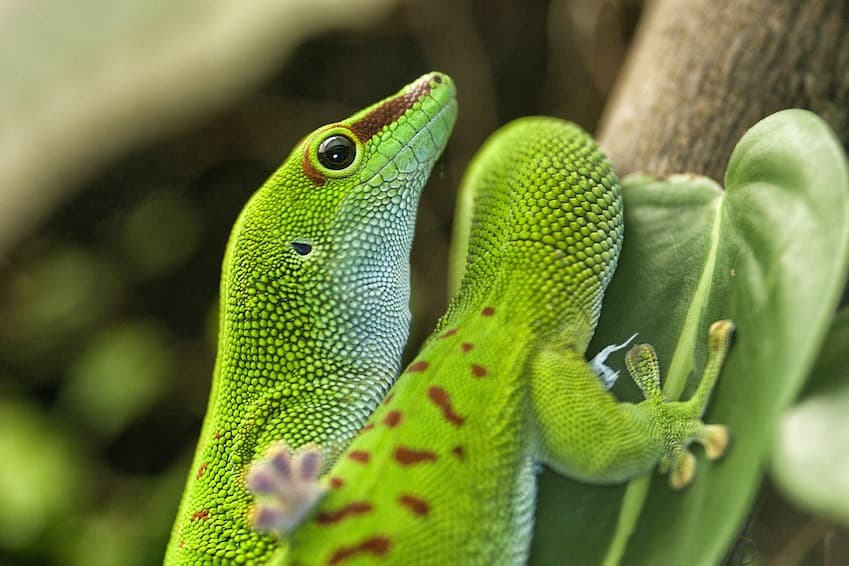 The isolated and remote nature of Mauritius lends itself to a unique and vibrant wildlife, with several species that are endemic to the island, i.e. found nowhere else on the planet. Intriguingly, there are no amphibians on Mauritius, and its native land mammals are restricted to just one species, that can take to the sky: Flying Foxes. However, the many beautiful species of reptiles and birds that live on this exquisite Indian Ocean island more than make up for this, and beneath the waves there is a plethora of varied and fantastical life. Come and discover a country where you can swim with dolphins and see the world’s only Pink Pigeons in the same day. 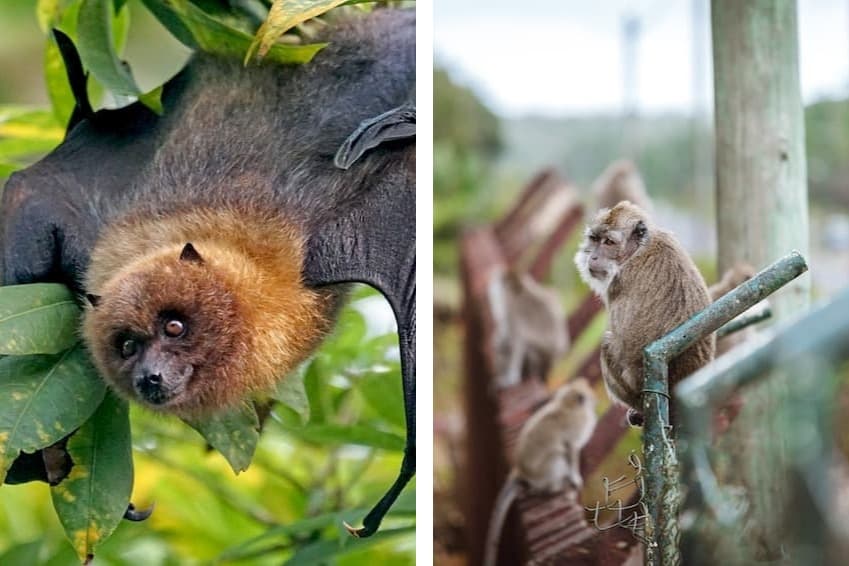 Beginning with one of the smallest, but nevertheless one of the most striking, inhabitants of the island: the Day-gecko. There are several subspecies of these reptiles, one of the most brightly coloured being Phelsuma guimbeaui, with a dazzling green body with red blotches, and a blue neck and tail-tip. This also happens to be one of the most endangered on the island, due to competition with other species of gecko for both food and space, as well as becoming the prey of introduced species such as rats, mongoose and cats. Phelsuma cepediana, the blue-tailed day-gecko, is much more widespread throughout Mauritius: just look out for a flash of intense greens and blues, again speckled with red spots, in the banana, palm and papaya trees.

Round Island, one of the offshore islets of Mauritius, has also become a haven for many species of reptiles, that escaped extinction due to the protective barrier of the ocean against invading species such as rats. Telfair’s skink, with no apparent neck, Gunther’s gecko, which can grow to a length of 30cm, and the harmless Keel-scaled Boa, which can change its colour over a 24 hour period, are three such species.

Now look up, and search the sky and canopy for the golden fur and broad dark wings of Mauritian Flying Foxes. These can reach a wingspan of 80cm, and are vital in pollinating the plants and dispersing the seeds that make the landscapes of Mauritius so lush and beautiful. However, in recent years there have been battles with owners of fruit orchards, who have encouraged the culling of the valuable and spectacular creatures. Because of this, the flying foxes of Mauritius are sadly now endangered. In contrast, conservation efforts to save the endemic Pink Pigeons of the island have meant that the shocking previous population of 12 in the mid-1980s is now at just under 500.

Macaques are also found on Mauritius, especially within the Black River Gorges National Park, however are not native to the island and were instead introduced by Dutch and Portuguese settlers approximately 400 years ago. 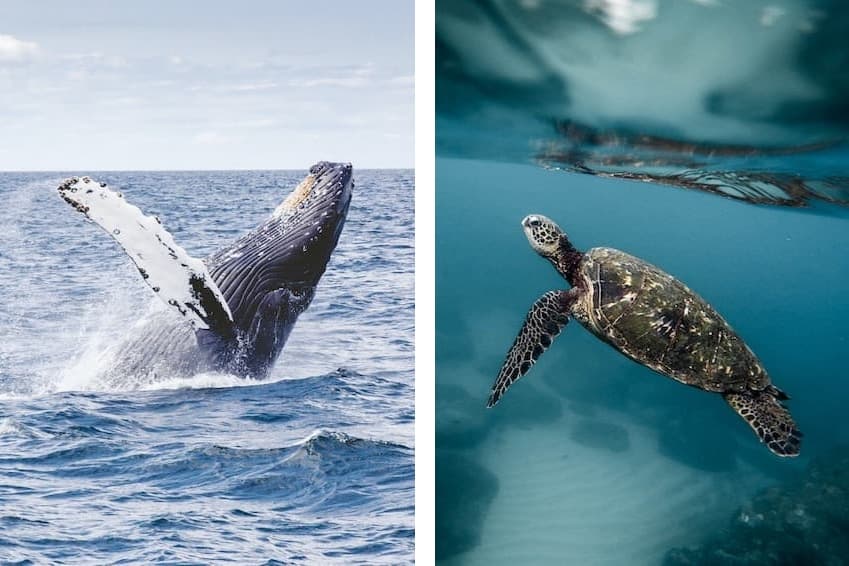 Mauritius enjoys a wealth of variety when it comes to its ocean, enjoying the habitats of tranquil lagoons, colourful coral reefs and the sudden drop-offs into deeper water that welcome its large marine mammals. These large visitors include humpback, sperm and pilot whales. A boat trip to see humpback whales is particularly exciting, owing to their very energetic tail and fin slapping and dramatic breaches. Here they defy gravity by propelling their mighty bodies out of the water, which can be up to 16m long, crashing back down with a tremendous splash.

Mauritius’s winter, from July to November, is the time to go if interacting with these animals is a dream for you! Note that the Southwestern waters of the island are the region that these elegant giants favour. Sperm whales, on the other hand, can be observed all throughout the year around Mauritius, almost always in groups of up to 20 individuals! But you don’t have to stay in the boat, you can actually get in the water and snorkel with these incredible creatures. This is the same for all dolphin lovers, where there are many tours offering the chance to swim with the playful and inquisitive Bottlenose and Spinner dolphins, in their natural open-sea environment.

Another creature that delights young and old to see is the sea turtle, and both Hawksbill and Green turtles populate the turquoise waters of Mauritius. Pointe aux Piments in the northwest is known as one of the best places to spot the graceful swimmers, so grab your snorkel and fins and explore the underwater wonderland! Early morning tends to be the time when the conditions are best for seeing the most marine life, as less boat activity means that the fish are not scared away by the sounds. Some of the most wondrous creatures you will see on snorkelling and diving excursions are lionfish, which have bands of red and white and dramatic spiny fins (these are also venomous, so be sure to keep your distance).

Giant Moray eels are another, and can be a mighty length of 3 metres. Intriguingly, these eels are known to recognise divers that visit them frequently, and will initiate contact. Of course, it is strongly recommended for those that are not familiar with the creatures to not try to touch them, as they do have sharp teeth! Honeycomb moray are particularly striking with their spotted markings, and can also reach a length of up to 3 metres. Indeed, these are just two of over a dozen different vibrant types of moray that reside in the island’s waters!

Everywhere you swim you will be treated to a kaleidoscope of parrot fish, surgeonfish, boxfish, butterflyfish and moorish idols amongst many others, so ensure you don’t just explore what’s on the land! For the keen-eyed, look out for tiny colourful nudibranch, a form of sea slug that come in hundreds of luminous shades and psychedelic patterns. 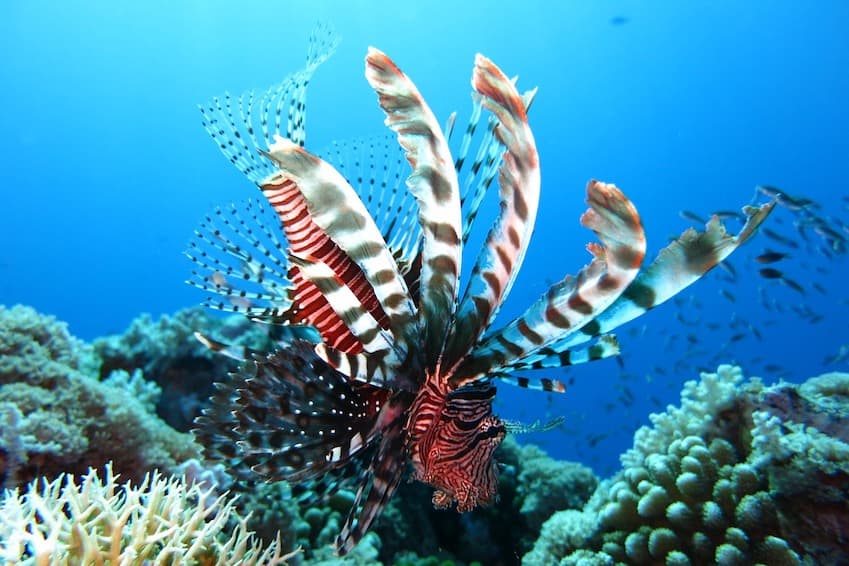